Twitter is the fastest growing microblogging site accumulating in the last few years about 500 millions users on its platform. Several institutes observed a raising activity of users on this network sustained by media activities such as a companion for TV watching or media consumption. 200 millions actives users worldwide spend an average of 114 minutes on Twitter to get updates from their followees and publish new status to their followers. All this activity on Twitter represents for business a huge database of content and uses that could be integrated into web, mobile and TV services but also on physical objects in order to communicate with targets. And when we talk about a huge database, we mean about 1 billion tweets are published every 2 days and a half which represents the most frequently updated database among the social media. Not all the tweets are relevant for business, but it’s a valuable material that can be exploited by brands. This is why we should call Twitter a cognitive framework and heuristic media, not simply a social network or a content site. Twitter is a heuristic media as long as it can be qualified as a framework that helps its users (not individuals only, but also brands) to find a solution, innovating and making discoveries. Twitter allows services builders on its platform to see far beyond the communities interactions and this is what we call “heuristic” media. As radiography reveals your bones, Twitter unveils much more about the interests of users than any other site.

If Facebook is a database of users qualified by their interactions among the social network (relationships, pages they like, comments, etc.), Twitter is the shortest distance between you (@) and what interests (#) you most. On Facebook, you’ll be in contact with your true friends, family members, colleagues which is not the case on Twitter which favours the weak links with your relatives. You’ve more chances to follow Lady Gaga or Justin Bieber on Twitter than your closest friends. Furthermore, it’s an opportunity for marketers to build online services that identify your interests on Twitter to provide you accurate information, content or offers according to your activity on this network. One of the most explicit example is “Programme TV d’Orange” iPhone application which imports the conversations from Twitter around your favorite TV shows page profiles allowing you to identify the best broadcastings of the day thanks to a “buzzometer” feature. Furthermore, the application platform works as a basic model of human-to-machine information system which authorizes users to ask questions (requests) and get answers (responses) from a server. For example, we observe disruptive actors on the financial market as Dwolla which propose to Twitter users to transfer money to their friends accounts by simply sending a tweet. By linking this kind of basic request-response system to others databases, marketers can build strong recommendations systems as Spotibot which propose users to send a tweet with the name of a music band to get suggestions about related band they probably don’t know. There are plenty of examples of innovations through Twitter application platform as BakerTweet, iGirouette or BeinSport. 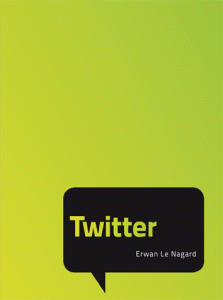